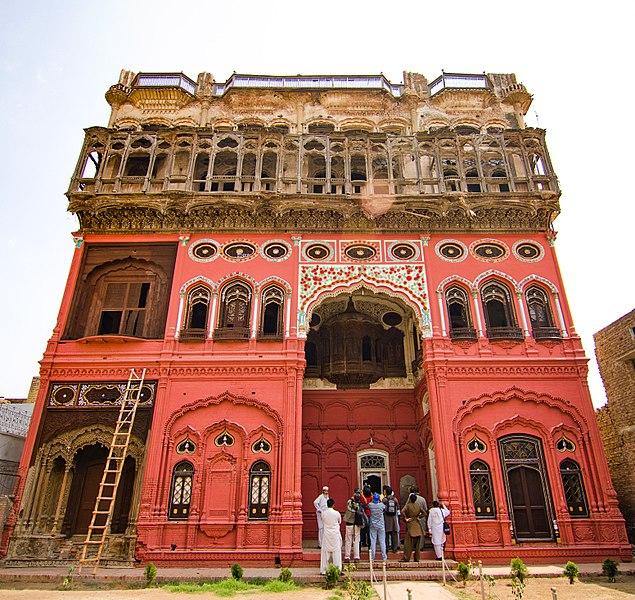 Omar Hayat Mahal, also spelt Umer Hayat Mahal, and alternatively known as Gulzar Manzil, is an early 20th-century wooden haveli mansion in Chiniot, Pakistan. The mansion was started in 1923, and was completed by 1935. The mansion, originally 5-storeys tall, was built by Sheikh Omar Hayat - a Chinioti businessman who had made his fortune in Calcutta. The edifice displays outstanding examples of Chiniot's local woodworking style, and has been described as an "ornament" of a building on account of its lavishly decorated interior.

The palace's building is perhaps the last of Mughal's architectural style, or a Mughal Revival building ("revival" buildings are interpretations of an old architectural style by people of a later era). Unique carving cuts on the doors, windows and jhirokas reflect a colour of their own. The roofs, balconies, stairways, terrace and the stucco designs make a perfect interior. The facade of the building is decorated with a fine inlay of bricks, the dazzling shine of marble and picturesque shades help it rank among the great palaces of Mughal era landlords.

Later on this placed was occupied by Qabza mafia who destroyed most of the building However seeing death of its glory in 1989, M. Athar Tahir, the then deputy commissioner of Jhang, took note of the mansion's poor state. He removed the encroachments, and brought the building under government ownership. Muhammad Amjad Saqib, Chiniot's assistant commissioner, lead a fundraising effort to raise money for the mansion's repair, and started its restoration with an expenditure of Rs1,700,000.

On 7 June 1990, it was decided that the Gulzar Manzil be acquired for the people, be conserved and restored. By the mid 1990s, large portions of the mansion had been repaired or restored, although the quality of some restoration works was poor.

Upon completion, it was decided that the mansion would be accorded a more dynamic role in the life of Chiniot, and thus a massive fund-raising drive was initiated for its conversion into a library and cultural centre. With the help of philanthropists and municipal authorities, the conversion efforts commenced on 14 August 1990. A rare collection of thousands of books and subscription for seven dailies was introduced to learners and It was publicly opened the then Punjab Governor, Mian Muhammad.

Keeping the vision and wishes of its owner in view, the library in the Gulzar Manzil was named after Sheikh Omar Hayat. In 1997 the municipal committee refused to bear the expenses and terminated the subscription of newspapers and other reading materials. At present the palace is again in disrepair, though the facade and interiors are well-maintained. The upper-most floors remain in a state of disrepair, however.