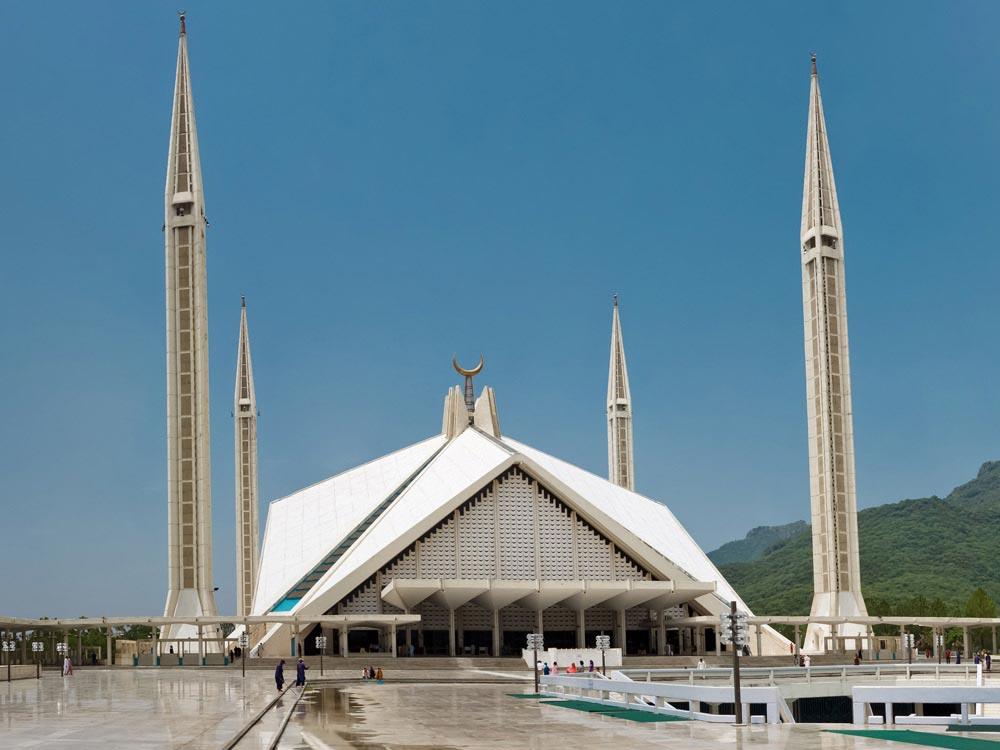 Construction of the mosque began in 1976 after a $120 million grant from Saudi King Faisal, whose name the mosque bears. The unconventional design by Turkish architect Vedat Dalokay was selected after an international competition. Without a typical dome, the mosque is shaped like a Bedouin tent, surrounded by four 260 feet (79 m) tall minarets. The design features eight-sided shell shaped sloping roofs forming a triangular worship hall which can hold 100,000 worshippers, while the surrounding porticoes and the courtyard up-to 200,000 more.

Combined the structure cover an area of 54,000 square ft, the mosque dominates the landscape of Islamabad. It is situated at the north end of Faisal Avenue, putting it at the northernmost end of the city and at the foot of Margalla Hills, the westernmost foothills of the Himalayas. It is located on an elevated area of land against a picturesque backdrop of the national park. The largest mosque in Pakistan, the Faisal Mosque was the largest mosque in the world from 1986 until 1993, when it was overtaken by mosques in MENA region. Faisal Mosque is now the fourth largest mosque in terms of capacity.

The Faisal Mosque has covered area of 5,000 m2 (54,000 sq ft). It can accommodate 10,000 worshipers in its main prayer hall, 40,000 in its porticoes, 50,000 in its courtyard, and another 200,000 in its adjoining grounds[citation needed]. Although its covered main prayer hall is smaller than that of the Hassan II Mosque in Casablanca, Faisal Mosque has the third largest capacity of accommodating worshipers in its adjoining grounds after the Masjid al-Haram (Grand Mosque) of Mecca, the Al-Masjid al-Nabawi (Prophet's Mosque) in Medina[citation needed]. Each of the Mosque's four minarets are 80 m (260 ft) high (the tallest minarets in South Asia) and measure 10 x 10 m in circumference.